TALK TURKEY TO ME--Things I Wish My Momma had Taught Me, Thanksgiving Edition

<<Original post November, 2012…
but the lessons remain as relevant--and important-- today as they had back then…>> 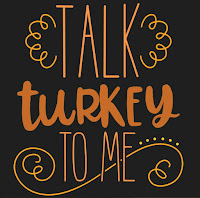 There comes a time when a woman must start hosting her own Thanksgiving celebrations.  For a woman who marries a military man and moves 3,000 miles away from family, these days come at a tender age of 22.  Had I had any inkling that I would have to prepare Thanksgiving feasts entirely on my own, my childhood holidays would have been better spent hanging out in the kitchen learning the tricks of preparing a flawless holiday mean instead of curling up in an over-sized arm chair with my nose buried in the latest Nancy Drew mystery.  As a result, I’ve had to learn a lot of Turkey Day lessons the hard way.

So in the spirit of the season, today I’m offering to a Top Five List of Things I Wish My Mother had Taught Me about Preparing (and Enjoying) a Thanksgiving Feast:

5) Don’t rely on Aunt Alma’s vague directions for turkey preparation.  Find out the basic ingredients then Google a recipe that has exact measurements.  For instance, should that dear aunt tell you to “rub a little sage” on the turkey before roasting, a quick Internet Search would help translate “a little” to a teaspoon, and not an entire half-ounce jar.  Speaking from experience, rubbing said half-ounce jar gives the white meat of the turkey an off-putting green tinge and results in gravy that looks like pea soup.  And the taste is rather off-putting, too!  No calling for pizza back-up on Thanksgiving, either…

4)    Think carefully before organizing (or participating in) a potluck feast.  Most military spouses I’ve met wage a subtle (yet vicious) culinary competition at all potlucks, especially holiday ones.  They’ll want to bring their most favorite family side dish, and often bring it in their Great-Great-Granny’s casserole dish that predates The Great War.  Yes, it makes for great presentation, and also great conversation, not to mention a tie to Thanksgivings past.  However, many people will be handling said dish, some of whom had more than their share of Lower Cape Codders (our holiday libation of cranberry juice and rum), which invariably results in the dish—and the memories—slipping out of fumbling hands and smashing to smithereens on the tile floor.  Proper etiquette requires the hostess offer to pay to replace it, which can put a huge dent in (or entirely wipe out) the Christmas budget that year.

3)    Be certain that the turkey preparations are done away from curious eyes, especially those of boys in the stage when they are particularly aware of bodily functions (ages 3 and up).  Experience has shown that when a young lad sees the stuffing going into--and them coming out of--the part of the turkey that goes over the fence last, it can cause lasting emotional scars that preclude him from ever eating stuffing again (and he’s 25 years old now.)

2)    Pre-Thanksgiving check lists should not only include food items, but also essential culinary tools  There is nothing worse than preparing to baste the turkey, only to find that your husband has purloined the baster for his automobile oil-siphoning needs in the garage--a fact he may not fess up to for years.  And any good cook knows that when you need a turkey baster, you need it right that second—no time to run to the nearest grocery store—if it’s even opened.

1)    If there is a dog (especially a big one) loose in the house, don’t leave the steaming turkey unattended while the family is gathered, heads bowed and eyes closed, for the blessing. The same may be said for a cat. Although the consequences aren’t quite as dour, as rarely can a seven-pound cat drag a twenty-pound turkey through the doggie door and out into the backyard. 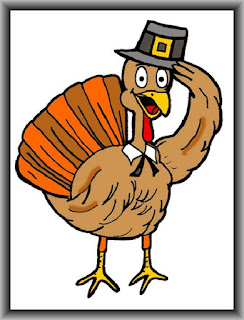 Hope You Gobble 'til you Wobble!

THRILLED to announce that my short mystery, "Wag More, Bark Less" has been accepted to The Big Fang anthology with an expected publication of December 2021. Proceeds of the sale will benefit the Harbor Humane Society. Stay tuned for publication details and cover reveal. EVEN MORE BEACH NEWS: Virginia is for Mysteries 3 anthology will be published by Koehler Books. Expected release in early 2022. This volume includes my short mystery "Sorry, Wrong Number."

...MURDER AT WAKEHURST by Alyssa Maxwell. An historical mystery set against the Gilded Age of Newport, RI. We've been stationed there a couple of times over the years and I've long been fascinated by the "summer cottages" owned by the uber rich. Reading about fictional cozy mysteries, it just doesn't get any better than this! _______________ Jayne just finished reading...DOWN THE HATCH, AN AGATHA RAISIN MYSTERY by M. C. Beaton. Sadly, Ms. Beaton passed away a few years ago, but R.W. Green has picked up the proverbial baton and run with it. I loved this one. Well plotted. Agatha up to her usual snarky self. I give it 5 (out of 5) beach umbrellas. Be sure and follow me on GOODREADS to keep up with all of my reviews.